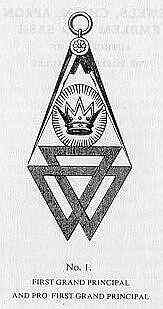 Hiram, the workman and designer drew patterns as God showed him, and while there with them directed the work until his "alleged" death, which of course Masons have no Bible foundation for. The only places where Hiram, or Huram the Architect is mentioned being in 2 Chron., 4th chapter, and I Kings 7th chapter, and those have reference only to his nativity, his world and its quality. So as nothing more was said of him, Satan filled the hearts of Masonic founders to take this man and make a savior out of him.

The Masonic story of Hiram Abiff then is a fable, continued by Satan to mock the word of God. "The Legend of the Temple Builders" is acted out in full while conferring the latter part of the third, or Master Mason's degree. The candidate is assaulted and the "word" is demanded of him (which as yet he has not received); he is then at the third assault struck on the head by a stuffed club called a setting maul, and symbolically killed. Then after a number of maneuvers he is buried on Mt. Moriah. He is missed, and after a long search his grave is found. Then comes the most damnable piece of mockery that Satan and the councils of hell could invent. A mock resurrection follows, and by the aid of Solomon and Hiram of Tyre he is raised from the dead by a grip known as the "Strong grip of the Lion of the tribe of Judah." Satan's counterfeit is complete, and the fiends of hell rejoice every time they see a poor blind candidate put through the mockery of coming from darkness to "Masonic" light. And yet men who profess to not only follow Christ, but preach his gospel also, support, countenance, attend, and recommend the institution to their sons and their friends.

The "Legend of Hiram Abiff the Temple Builder" is copied from the legend of Osiris the Egyptian deity, and so closely resembles it as to prove the one to be copied from the other. Mackey says a great deal about "ancient mysteries," Egyptian rites, and also speaks of Osiris and others; and by following up his works, notes etc., "Pierson's Traditions," and "Morris' Dictionary" we are able to trace Masonry to right where it originated, i. e., in ancient Baal or sun worship. See Ezek. 8th chapter and especially 16th verse. Ezekiel clearly saw ancient Masonry in that vision. Tammuz, spoken of in verse 14, has reference to Adonis, another person, whose, history corresponds to that of Hiram and Osiris. Sun worship it clearly is, worked over to make what Dr. Oliver proudly calls "A universal religion." Dr. Oliver is a noted English Masonic writer and historian. He says, "To Christianize Masonry by praying to or through Christ would sink it from its sublime position as a universal religion to the level of a sect." There is a "learned Masonic" opinion of Christ. What do you think of it? No Christ there, is there? One Mason of my acquaintance, who at the time of which I speak had been a member of this order only a few months, said to me, "There is a god in Masonry, but no Christ." He had learned that in a few months, and yet said that he was a follower of Christ.

Beloved, how can these things be? All Masons know the truth of this matter. Can God look in mercy upon a man who professes his name, and yet touches these unclean, unholy, idolatrous worlds, or partakes with them?

Again before all of God's people I praise him for delivering me from such works. "Whom Christ makes free is free indeed." Such works as "Mackey's Lexicon," also his "Ritual," "Pierson's Traditions," "Morris' Dictionary," and other works Show what those great Masons who are acknowledged authority, say of Masonry as a religion, as well as of other points.

Those men have by their works enabled me to see more of Masonry than the average Mason sees in a life time. The books referred to, as well as their authors, are all standard, and are not "exposes" in any sense of the word, yet they are keys by which he who has been in the secret chambers of the lodge can unlock the secrets of Masonry to the world, and prove every step he takes. Truly, truly, did Christ say "Out of thine own mouth will I judge thee, thou wicked servant."ùLuke 19:22. "For by thy words thou shalt be justified, and by thy words thou shalt be condemned.ùMatt. 12:37.

O foolish Masons, who hath bewitched you, that ye should not obey the truth, before whose eyes Jesus Christ hath been evidently set forth, crucified among you! So Satan has overstepped himself, and while he thinks himself safely entrenched, God has found him out, and will pull him and his worlds down, even though they have climbed up another way.