Ranting House stenographer comes out with a statement. 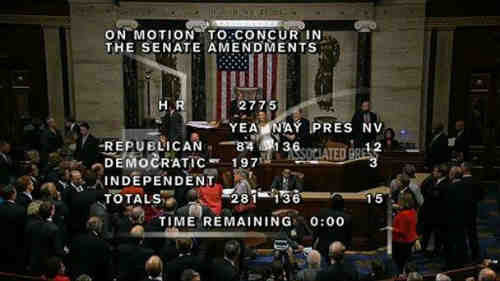 In this image from House Television on Oct. 16, 2013, with partial voting totals on the screen, a woman is removed from the House chamber after she began shouting during the vote for the bill to end the partial 16-day government shutdown.

The stenographer, Dianne Reidy, who tried to give a sermon of sorts, as the House voted to end the government shutdown Wednesday night, has released a statement about her strange behavior.

In the statement, which was tweeted by Fox News reporter Chad Pergram Thursday, Reidy said the "Holy Spirit has been waking me up in the middle of the night … to deliver a message to the House Chamber."

She also said that despite her "reluctance and doubt" she decided to take her exhortations to the podium Wednesday night.

Stunned lawmakers stared on as the situation developed. Those that know Reidy were especially shocked, saying that such behavior was out of character for the stenographer.

" She is normally a gentle soul," Rep. Ileana Ros-Lehtinen (R-Fla.) told Fox News of Reidy. "It was sudden, confusing and heartbreaking."

The Capitol Police interviewed Reidy Wednesday night, before sending her to a "local area hospital for evaluation," NBC News reported.

Reidy's husband applauded his wife's actions saying that she is a "level-headed, wonderful woman of God. I am so proud of her," Roll Call reported.