Who Is St. Maximilian Kolbe? 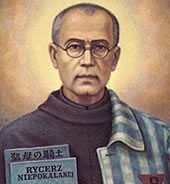 1917-1929: Fr. Maximillian Kolbe Publishes a Prayer and Founds an Order for the conversion of Masons

1930-2010: The Vatican transfers Fr. Maximillian Kolbe to an empty hillside in Nagasaki, Japan and removes all references to Freemasonry from the Militia Immaculata website


Militia of the Immaculata Canada
http://consecration.ca/about/stmaxmiliankolbe/

Who Is St. Maximilian Kolbe?

St. Maximilian was born Raymond Kolbe in Poland, January 8, 1894. In 1910, he entered the Conventual Franciscan Order. He was sent to study in Rome where he was ordained a priest in 1918.

Father Maximilian returned to Poland in 1919 and began spreading his Militia of the Immaculata movement of Marian consecration (whose members are also called MIs), which he founded on October 16, 1917. In 1927, he established an evangelization center near Warsaw called Niepokalanow, the "City of the Immaculata." By 1939, the City had expanded from eighteen friars to an incredible 650, making it the largest Catholic religious house in the world.

To better "win the world for the Immaculata," the friars utilized the most modern printing and administrative techniques. This enabled them to publish countless catechetical and devotional tracts, a daily newspaper with a circulation of 230,000 and a monthly magazine with a circulation of over one million. Maximilian started a shortwave radio station and planned to build a motion picture studio–he was a true "apostle of the mass media." He established a City of the Immaculata in Nagasaki, Japan, in 1930, and envisioned missionary centers worldwide.

Maximilian was a ground-breaking theologian. His insights into the Immaculate Conception anticipated the Marian theology of the Second Vatican Council and further developed the Church’s understanding of Mary as "Mediatrix" of all the graces of the Trinity, and as "Advocate" for God’s people.

In 1941, the Nazis imprisoned Father Maximilian in the Auschwitz death camp. There he offered his life for another prisoner and was condemned to slow death in a starvation bunker. On August 14, 1941, his impatient captors ended his life with a fatal injection. Pope John Paul II canonized Maximilian as a "martyr of charity" in 1982. St. Maximilian Kolbe is considered a patron of journalists, families, prisoners, the pro-life movement and the chemically addicted.

This timeline is a condensation derived from the Polish Knight, Rycerz Niepokalanej, September, 1982

•1894 January 8: Raymond Kolbe is born at Zdunska Wola, the second son of Julius and Marianne (Dabrowska) Kolbe. The same day he was baptized in the parish church.

•1902 June 29: Raymond receives his First Holy Communion in Pabianice, where the family had moved, looking for better work as weavers.

•1907: Under the influence of the preaching of Fr. Peregrine Haczela, OFM CONV., during the parish mission in Pabianice, Raymond and Francis Kolbe enter the preparatory seminary of the Conventual Franciscans in Lwow.

•1910 September 4: Despite the uncertainties about his calling Raymond receives the Franciscan habit from Fr. Peregrine Haczela, the Minister Provincial, and his name in the Order, Maximilian, at the novitiate in Lwow.

•1912 November: Friar Maximilian is sent to the Order’s international seminary in Rome and begins the study of philosophy at the Jesuit Gregorian University.

•1914 November 1: Friar Maximilian professes his "solemn" vows of poverty, chastity and obedience at the seminary of the Order in Rome.

•1915 October 22: Friar Maximilian earns his doctorate in philosophy and begins his study of theology in the Pontifical Faculty of St. Bonaventure in Rome.

•1917 January 20: On the seventy-fifth anniversary of the appearance of Mary to Alphonse Ratisbonne, during his meditation in the seminary chapel, Friar Maximilian resolves to establish a Marian organization.

•1917 October 16: Friar Maximilian establishes the Militia of the Immaculata with six other student friars of the Order’s seminary.

•1918 April 28: Friar Maximilian is ordained a priest by Cardinal Basil Pompilii, in the Church of Sant’ Andrea della Valle, Rome.

•1918 April 29: Father Maximilian celebrates his first Mass in the Church of Sant’ Andrea della Fratte at the very altar where Our Lady appeared to Alphonse Ratisbonne in 1842.

•1919 March 28: Pope Benedict XV blesses the MI by word of mouth at the request of Archbishop Dominic Jaquet.

•1919 April 4: Fr. Dominic Tavani, Vicar General of the Order, bless and confirms the MI in writing.

•1919 July 29: He is assigned to the Order’s seminary in Krakow to teach Church history, beginning in October.

•1919 December 20: Cardinal Adam Stephen Sapieha grants permission for diplomas (certificates) of the MI to be printed in Polish.

•1920 August 10: Father Maximilian journeys to the Tatra Mountain village of Zakopane for treatment of tuberculosis of the lungs and functions as chaplain for the "Climatic" Hospital. He is discharged on April 28, 1921.

•1922 January 2: The MI is approved in Rome as a "Pious Union" by Cardinal Basil Pompilii, Vicar General of the Archdiocese of Rome.

•1922 January: There appears the first issue of the Knight of the Immaculata with a press run of 5,000 copies.

•1922 October 20: Father Maximilian is transferred to the friary of Grodno, where he continues as editor of the Knight and begins printing with the help of two brothers.

•1926 September 18: He returns to Zakopane for treatment of tuberculosis again and remains until April 13, 1927.

•1927 June and July: Father Maximilian meets Prince John Drucki-Lubecki to examine the possibility of obtaining land from the prince for a new friary and publishing house.

•1927 August 6: Father Maximilian blesses a statue of the Immaculate Mother of God at Teresin near Warsaw in the land of the future friary.

•1927 November 21: Father Maximilian and his brothers move with their equipment from Grodno to Niepokalanow, the "City of the Immaculata."

•1927 December 7: The Minister Provincial, Fr. Cornelius Czupryk, blesses the new foundation, which consists of two priests and eighteen professed brothers and candidates, of whom Father Maximilian is named guardian (superior).

•1929 June 2: The Minister Provincial gives permission for the establishment of a minor seminary in Niepokalanow.

•1930 February 26: Father Maximilian, prompted by a chance meeting with young Japanese, sets out for Japan to found another City of the Immaculata. He is accompanied by four Brothers, Zeno Zebrowski, Hilary Lysakowski, Sigmund Krol, and Severin (John) Dagis. He makes plans in Shanghai to found another City there.

•1930 April 24: They arrive in Nagasaki, where Bishop Hayasaka permits them to publish a magazine on the condition that Father Maximilian teach philosophy at the diocesan seminary.

•1930 May 24: One month after their arrival the first issue of the Japanese Knight, Seibo no Kishi, is published with a press run of 10,000 copies.

•1930 June and July: Father Maximilian returns to Poland across Siberia to attend the Provincial Chapter.

•1930 July 24: He is reappointed superior of the Japanese mission and his brother, Alphonse, the guardian of Niepokalanow and editor of the Knight.

•1931 March 4: Father Maximilian purchases land for a new friary in the poor district of Nagasaki-Hongochi at the base of Mt. Hikosan.

•1931 May 16: The friars move to the new facility, which is named Mugenzai no Sono (Garden of the Immaculata).

•1932 May to July: Father Maximilian voyages to India to arrange for another City in the near future.

•1933 April and May: He returns to Poland for the Provincial Chapter after a stopover of three weeks in Rome.

•1933 July 17-20: He attends the Provincial Chapter in Krakow, during which he remains as editor of the Japanese Knight and the general administrator of the MI for the whole world. The ex-provincial, Fr. Cornelius Czupryk, is named superior of the Japanese mission.

•1936 April 16: A minor seminary is opened in the Japanese Garden of the Immaculata.

•1936 May and June: Father Maximilian leaves Japan for good, returning for the Provincial Chapter in Krakow, where he is appointed guardian of Niepokalanow on July 16.

•1936 December 8: At the urging of Father Maximilian the Conventual Franciscan Order consecrates itself to Mary Immaculate.

•1938 February: At Niepokalanow he publishes the first issue of the Knight of the Immaculata, Miles Immaculatae, in Latin; this quarterly is meant to propagate the MI among the clergy.

•1938 December 8: They inaugurate the radio transmitting station with a sermon by Father Maximilian on Station SP 3 RN.

•1939 September 1: Poland is invaded by Nazi Germany and soon the 772 professed and candidate members were caught up in the war.

•1939 September 19: Father Maximilian is arrested for the first time with thirty-five brothers, another priest and a Korean seminarian.

•1939 December 8: Father Maximilian and the friars with him at Ostrzeszow are set free and return the next day to Niepokalanow.

•1940 November 21: After several requests Father Maximilian is allowed to publish one issue of the Knight of the Immaculata with a press run of 120,000 copies, dated December 1940 – January 1941.

•1941 February 17: He is arrested and taken to Pawiak Prison in Warsaw by the Gestapo where he is cruelly treated.

•1941 May 28: Father Maximilian is transported in a trainload of prisoners to Oswiecim (Auschwitz) where is is tattooed with the number 16670.

•1941 July 28 – August 1: Between this five-day period Fritsch, the Commandant, sentences ten prisoners from Block 14 to death by starvation in retaliation for an escaped prisoner from their block. Father Maximilian’s offer to die for one of the condemned, Francis Gajowniczek, is accepted. The condemned are placed in the basement bunker of Block 13.

•1941 August 14: Father Maximilian is killed by an injection of lethal acid.

•1941 August 15: His body is burned in the crematorium and according to his prediction, dispersed to the wind.

•1971 June 14: The two miracles attributed to Ven. Maximilian are confirmed by Pope Paul VI and he is beatified on October 17 in St. Peter Basilica in Rome, by Pope Paul VI. (July 1948 Angela Testoni cured of tuberculosis of the intestines and August 1950 Francis Ranier cured of calcification of the arteries/sclerosis)

•1982 October 10: Pope John Paul II, in a huge ceremony in St. Peter’s square, declares his compatriot a "Saint", a martyr of charity