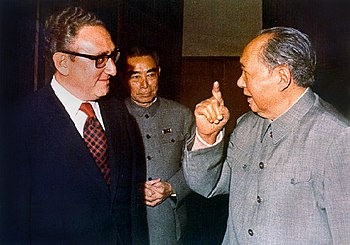 The Paris Peace Accords of 1973 intended to establish peace in Vietnam and an end to the Vietnam War. It ended direct U.S. military combat, and temporarily stopped the fighting between North and South Vietnam. The governments of the Democratic Republic of Vietnam (North Vietnam), the Republic of Vietnam (South Vietnam), and the United States, as well as the Provisional Revolutionary Government (PRG) that represented indigenous South Vietnamese revolutionaries, signed the Agreement on Ending the War and Restoring Peace in Vietnam on January 27, 1973. The agreement was not ratified by the United States Senate.[1][2]

The negotiations that led to the accord began in 1968 after various lengthy delays. As a result of the accord, the International Control Commission (ICC) was replaced by International Commission of Control and Supervision (ICCS) to fulfill the agreement. The main negotiators of the agreement were United States National Security Advisor Henry Kissinger and Vietnamese politburo member Lê Đức Thọ; the two men were awarded the 1973 Nobel Peace Prize for their efforts, although Lê Đức Thọ refused to accept it.

No Peace, No Honor: Nixon, Kissinger, and Betrayal in Vietnam

On April 30, 1975, when U.S. helicopters pulled the last soldiers out of Saigon, the question lingered: Had American and Vietnamese lives been lost in vain? When the city fell shortly thereafter, the answer was clearly yes. The Agreement on Ending the War and Restoring Peace in Vietnam — signed by Henry Kissinger in 1973, and hailed as “peace with honor” by President Nixon — was a travesty.

In No Peace, No Honor, Larry Berman reveals the long-hidden truth in secret documents concerning U.S. negotiations that Kissinger had sealed — negotiations that led to his sharing the Nobel Peace Prize. Based on newly declassified information and a complete North Vietnamese transcription of the talks, Berman offers the real story for the first time, proving that there is only one word for Nixon and Kissinger’s actions toward the United States’ former ally, and the tens of thousands of soldiers who fought and died: betrayal.