By Des Houghton
The Courier-Mail 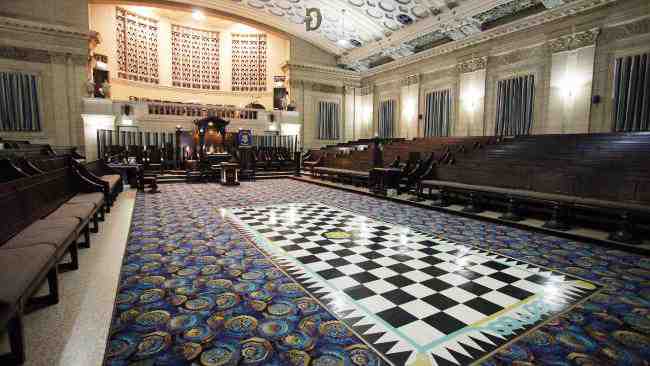 The Brisbane Masonic Temple will open their doors to the public as part of a Brisbane Open House Day. Picture: Jeff Camden Source: The Courier-Mail

IMAGINE a heritage building resembling a sacred cathedral, a royal palace and an antiquities museum all rolled into one.

Brisbane has such a building, but it is rarely seen. The Masonic Memorial Temple in Ann St, a trove of Freemason history, has been hidden away for 80 years behind towering Corinthian columns.

Now the temple is about to open its doors to the public on October 2 for guided tours as part of the Brisbane Open House program, Brisbane's Courier-Mail has reported.

The temple's coming out is part of a Brisbane Development Association program to unlock the doors to 22 city buildings not usually open to the public.

Visitors may peek behind the scenes at the Queensland Performing Arts Centre and the Queensland State Library, or take in the spectacular view of the Brisbane River from the trigeneration plant high up on the new Santos Place.

Most interest will no doubt centre on the Masonic temple, steeped as it is in history and architectural intrigue yet still a mystery to most Queenslanders.

The temple was built as a shrine and monument as well as to accommodate large Masonic events.

It comes complete with grand ceremonial spaces, particularly the Grand Hall, the Court of Remembrance and the massive urn of remembrance built in memory of masons who fell in World War I. Designed by Lange Powell, himself a Freemason, and constructed between 1928 and 1930, the temple was built solely from Queensland materials – sandstone from Helidon and marble from Chillagoe in north Queensland.

The furniture was built on-site during construction using local cedar, maple and silky oak timber from Atherton. It originally cost $260,000 and is today Heritage listed with a value of more than $14,000,000.

Dr Gary Bacon, the deputy grand master, said the temple was the headquarters for Queensland's 10,000 masons from 300 lodges.

Freemasonry traces its origins back to the 1300s and is steeped in secret rituals.

An additional 380 new members joined in the past 12 months, Dr Bacon said.

Historically, the masons maintained an enmity with Catholics, and vice versa, but that is now in the past, Dr Bacon said.

Indeed, Dr Bacon is a former school captain of Gympie Christian Brothers' College and says a Catholic priest from the Darling Downs is now a member.

As long as a person is older than 18, without a criminal record and believes in a divinity, he is eligible to be a member. The emphasis here is on he. No women are allowed.

"We are very proud to be part of Brisbane's living history network, having celebrated our 150 years last year. We are as old as Queensland itself."

Brisbane Open House, an initiative of the Queensland Government Architect and the Brisbane Development Association, is set to become an annual event.

BDA executive director John Pettit says the initiative aims to enrich understanding of the city through encouraging residents to explore, re-examine and engage with the city's built environment.

"We all love our city, but don't always get the chance to explore its history and see inside some of our most iconic developments," Mr Pettit said.

It is expected that more than 10,000 visitors will take tours through the buildings.