The Homunculus X░: Create your very own Alien Gray in the privacy of your own home... 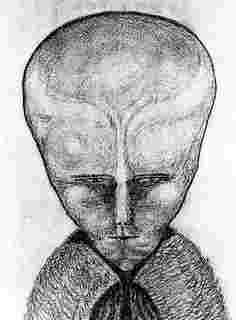 OF THE HOMUNCULUS
A Secret Instruction of the Tenth Degree

Baphomet X░ O.T.O. Rex Summus Sanctissimus to all His Holy and Royal Brethren of the X░ upon earth, and to His Viceroys in all the Britains, Greeting and Peace.

Under the seal of the Obligation of the IX░

1. The homunculus is a living being in form resembling man, and possessing those qualities of man which distinguish him from beasts, namely intellect and power of speech, but neither begotten and born after the manner of human generation, nor inhabited by a human soul.

2. Thus, supposing that the re-incarnating Ego enters the foetus at the third month of gestation, it would not serve to remove such foetus from the mother, and cause it to live; for it is already human. But a foetus of two months might become homunculus.

3. A human being can only become homunculus if obsessed by a demon to such an extent that the human soul is irrevocably expelled to the same degree as in death, and freed utterly so that it seeks a new tenement, and is cut off absolutely from the old. But even this, rare as it must be except in lunacy, involves an extension of the natural meaning of the term homunculus.

4. In the third chapter we discuss Our method of producing that which, if not a true homunculus, at least serves all proper purposes thereunto pertinent.

1. The classical method of making the homunculus is to take the fertilized ova of a woman and to reproduce as closely as may be, without the uterus, the normal conditions of gestation therein.

2. For: in the case of ectopic gestation, it is clearly possible for the ovum to develop for a considerable period; and a child of 4¢ months weighing nine ounces, has been known to live for over an hour after delivery. These considerations encourage us. Life is indefinitely adaptable, and life originally appeared in a planet bacteriologically sterilized by temperatures of many thousands of degrees Centigrade. There is therefore every reason to hope that, starting as we do with the proper First Matter, we may be able to devise conditions of its growth in a æcultureÆ, just as we have done in the case of the simpler organisms.

3. The White Tincture of the Alchemists was in this connection a replica of the Liqor Amnii, and their Red Tincture a substitute for Blood.

4. Certain truly magical aids to the physiological experiments indicated above have always been held worthy. The Adept must, however, be left to devise these, as in so small a treatise we have no place for a subject so starry vast as this.

1. We assume that Our Brethren have well studied Our Epistle De Arte Magica Secundum Ritum Gradus Nonae O.T.O. k.t.l. v2. Before introducing our own method of making the homunculus, let us refer to (A) the theory of Incarnation and (B) the method of Evocation invented by us in An VI Sol in Aries (April 1910 E.V.).

For about three months the foetus is empty of any soul. It then attracts an Ego of such a nature as (a) its own Karma i.e. naturae and tendency, and (b) the Karma of the Ego, combine to make viable. If a suitable combination is not found, the result is either miscarriage, still-birth or the birth of an idiot. In the last case the foetus has been obsessed by some dumb non-human spirit, or by some human spirit of exceptional Karma. By Karma We mean always nature and tendency, and no more, although we use these words in a large sense to include all causes moral as well as physical. But we include not any conceptions of æJusticeÆ and the like in these.

If this be accepted, then clearly it is possible that a magician might find means (a) to bar the gate against any Human Ego, and (b) to cause the Incarnation of some non-human being, such as an elemental or planetary spirit, of a nature fitted to some desired end. Thus one eloquent, from an incarnation of Tiriel, or one bold in war, from the indwelling of Graphiel. And these will be his chief difficulties (a) that Man (even when discarnate) is so spiritually powerful, that to bar him from his urgent need is a task of colossal awe; and (b) it is necessary to choose a spirit suitable to the foetus. Thus if the babe that is to be were by reason of physical heredity sluggish, melancholy and weak, it would be but nugatory to invoke into it a spirit of Nakhiel or Raphael or Haniel or Anael.

The human soul is all but inexpugnable; yet We have succeeded in the temporary expulsion of a weak and wandering soul, and its replacement. For example, We once supplanted the soul of a Calibancreature, a certain deformed and filthy abortion without moral character, named Victor Neuburg, by a soul of Isis, by a soul of Mars and by a soul of Jupiter in turn, so that this quasi-human shape, not being a poet, did yet write verses goodly and great in praise of Isis; and not being a prophet, did yet foretell most accurately the wars which even now devastate the earth; and not being generous or wealthy did yet for a season support many dependants on his bounty.

And this we did with no elaboration of thought, no Persian apparatus, no weariness or trouble at all.

Now then do We mark down the Means devised by Us Baphomet for the making of the homunculus.

Take a suitable woman willing to aid thee in this Work. Explain to her fully the precautions to be taken and the manner of life necessary. Let her horoscope be, if possible, suited to the nature of the homunculus proposed; as, to have an incarnate Spirit of Benevolence let Jupiter be rising in Pisces with good aspects of Sol, Venus, and Luna; and with no notable contrary dispositions; or so far as may be possible.

Take now a man suitable; if convenient, thyself or some other Brother Initiate of the Gnosis; and so far as may be, let his horoscope also harmonize with the nature of the work.

Let the man and woman copulate continuously (but especially at times astrologically favourable to thy working) and that in a ceremonial manner in a prepared temple, whose particular arrangement and decoration is also suitable to thy work. And let them will ardently and constantly the success of thy work denying all other desires. Thus proceed until impregnation results.

Now let the woman be withdrawn and carried away to a place prepared. And this place should be a great desert; for in such do rarely wander any human souls seeking incarnation.

Further let a great circle be drawn and consecrated to the sphere of the work; and let banishing formulae of the Sephiroth, and especially of Kether, be done often, even unto five or seven times on every day. Outside which great circle let the woman never go. Let the mind of the woman be strengthened to resist all impression, except of the spirit desired. Let the incense of this spirit be burnt continually; let his colours, and his only, be displayed; and let his shapes, and his only, appear so far as may be in all things. Further let him be most earnestly and continually invoked in a temple duly dedicated, the woman being placed in a great triangle, while thou from the circle dost perform daily the proper form of Evocation to Material Appearance. And let this be done twice every day, once while she is awake and once while she is asleep.

And let the quickening be a feast of the Reception of the Spirit. Henceforth ye may omit the Banishings.

VI And during the rest of the Pregnancy let there be the Charge to the Spirit (so that the whole period of all this work is as it were an expansion in terms of life of the Art-formula of Evocation) in this manner. Let the woman be constantly educated by words and by books and by pictures of a nature consonant, so that all causes may work together for the defence and sustenance of the Spirit, and for its true development.

And let the delivery of the woman be retarded or advanced so far as possible to secure a rising sign proper to such a child.

VIII The child being born must be dedicated, purified and consecrated, according to the formulae of the planet, element, or sign, of which it is the Incarnation.

IX Now then thou hast a being of perfect human form, with all powers and privileges of humanity, but with the essence of a particular chosen force, and with all the knowledge and might of its sphere; and this being is thy creation and dependent; to it thou art Sole God and Lord, and it must serve thee. Therefore the whole of all that part of Nature whereunto it belongs is thy dominion; and thou art Magister Octinomous.

Be wary, Brother Adept, and choose well thine object, and spare not pain and labour in the Beginning of thy Operation; for to have corn of so subtle a seed is a great thing once; to achieve it twice were the mark of a primal energy so marvellous, that We doubt whether there be one man born in ten times ten thousand years that hath such wonder-power.

Now the Father of All prosper ye, my Brethren that dare lay hold upon the Phallus of the All-One, and call forth its streams to irrigate your fields.

And may the spirit of Prometheus hearken, and the Spirit of Alcides aid, your Work.

Farewell, therefore; in the name of the Secret Master Blessing and Peace from Us Baphomet X░