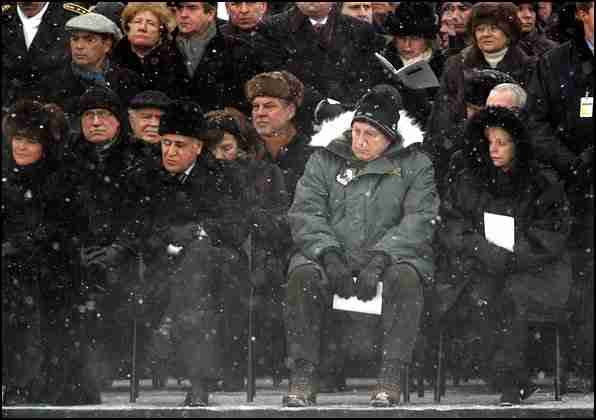 At yesterday's gathering of world leaders in southern Poland to mark the 60th anniversary of the liberation of Auschwitz, the United States was represented by Vice President Cheney. The ceremony at the Nazi death camp was outdoors, so those in attendance, such as French President Jacques Chirac and Russian President Vladimir Putin, were wearing dark, formal overcoats and dress shoes or boots. Because it was cold and snowing, they were also wearing gentlemen's hats. In short, they were dressed for the inclement weather as well as the sobriety and dignity of the event.

The vice president, however, was dressed in the kind of attire one typically wears to operate a snow blower. 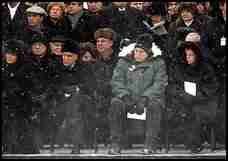 Cheney stood out in a sea of black-coated world leaders because he was wearing an olive drab parka with a fur-trimmed hood. It is embroidered with his name. It reminded one of the way in which children's clothes are inscribed with their names before they are sent away to camp. And indeed, the vice president looked like an awkward boy amid the well-dressed adults.

Like other attendees, the vice president was wearing a hat. But it was not a fedora or a Stetson or a fur hat or any kind of hat that one might wear to a memorial service as the representative of one's country. Instead, it was a knit ski cap, embroidered with the words "Staff 2001." It was the kind of hat a conventioneer might find in a goodie bag.

It is also worth mentioning that Cheney was wearing hiking boots -- thick, brown, lace-up ones. Did he think he was going to have to hike the 44 miles from Krakow -- where he had made remarks earlier in the day -- to Auschwitz?

His wife, Lynne, was seated next to him. Her coat has a hood, too, and it is essentially a parka. But it is black and did not appear to be functioning as either a name tag or a billboard. One wonders if at some point the vice president turned to his wife, took in her attire and asked himself why they seemed to be dressed for two entirely different events.

Some might argue that Cheney was the only attendee with the smarts to dress for the cold and snowy weather. But sometimes, out of respect for the occasion, one must endure a little discomfort.

Just last week, in a frigid, snow-dusted Washington, Cheney sat outside through the entire inauguration without so much as a hat and without suffering frostbite. And clearly, Cheney owns a proper overcoat. The world saw it during his swearing-in as vice president. Cheney treated that ceremony with the dignity it deserved -- not simply through his demeanor, but also through his attire. Would he have dared to take the oath of office with a ski cap on? People would have justifiably considered that an insult to the office, the day, the country.

There is little doubt that intellectually Cheney approached the Auschwitz ceremony with thoughtfulness and respect. But symbolism is powerful. That's why the piercing cry of a train whistle marked the beginning of the ceremony and the glare of searchlights signaled its end. The vice president might have been warm in his parka, ski cap and hiking boots. But they had the unfortunate effect of suggesting that he was more concerned with his own comfort than the reason for braving the cold at all.