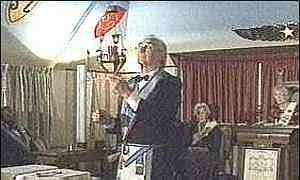 Depending on your point of view freemasonry is either a gentlemen's club devoted to moral and spiritual values or a corrupt organisation intent on looking after number one.

Lord Justice Milliett: "freemasonry is not an interest" (1' 53")

One thing is certain - freemasons would like to stay out of the public eye as much as possible.

It is this determination to preserve a shroud of secrecy which arouses suspicion in non-masons. 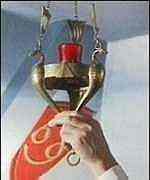 Masonry is surrounded by myth and legend

Even their origins are open to question. Some say the first examples of masonry date back to the Egyptian pyramid builders although modern freemasons can only claim a 300-year history.

Throughout their history stories of rituals and threats have leaked out.

There are freemasons all over Europe and North America.

Italy in particular is riddled with masonic lodges - the most famous of which was the corrupt P2 lodge - and freemasons have been at loggerheads with the Roman Catholic Church for years.

But it is how the membership is made up that worries some quarters.

The freemasons are estimated to have more than 300,000 members in the UK and thousands more abroad.

Stories are rife of masons winning promotion because their boss is a member and accused men standing in the dock giving the judge a sly sign indicating he is a mason, although evidence of such cases remains flimsy.

But Martin Short, author of Inside the Brotherhood, told the Home Affairs Select Committee how two Asian businessmen stumbled on a masonic dinner at a hotel and were prosecuted on trumped up charges of assaulting police officers.

He said it later became apparent that the police officers were lodge members as was the investigating officer, a senior official in the Crown Prosecution Service and the hotel manager. A presumably non-masonic jury acquitted the businessmen.

Two years ago the select committee said: "We believe that nothing so much undermines public confidence in public institutions as the knowledge that some public servants are members of a secret society, one of whose aims is mutual self-advancement." 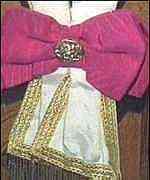 Masonic rules state that members must do all they can to support each other, to look after each other and to keep each others' lawful secrets.

For those breaking the rules, the penalties are outlined in bizarre initiation rituals.

New members are blindfolded, wearing a hangman's noose and are warned their throat will be slit, their tongue torn out and then they will be buried in the sand.

The rituals are all too similar to those of the Cosa Nostra and the Triads.

No-one believes masons will carry out the threats but critics argue the oaths of allegiance could put them at odds with public duty.

Since 1717 when four London lodges came together to form a Grand Lodge based on the concepts of brotherly love, relief and truth, non-members have been suspicious of freemasonry.

But it was only 14 years ago that masons began courting public acceptance with a leaflet on the positive aspects of their "craft".

Eight years later the media were invited to attend a masonic meeting for the first time.

Freemasons argue their organisation is open to any man regardless of religion or colour. But women are excluded.

They say all that is needed to join is a belief in a god, not necessarily the Christian God, and a good reputation.

They insist a mason who is a judge, for example, could not be put in a compromising position because freemasonry demands members respect the law.

Freemason literature says the society condemns members who use membership to promote his personal or business interests.

There have also been questions about masonic involvement in the John Stalker disciplinary hearing, which forced the former Deputy Chief Constable of Greater Manchester to abandon his inquiry into an alleged shoot-to-kill policy being operated in Northern Ireland.

So far the masons summoned, Commander Michael Higham, Grand Secretary of the United Lodge of England, and John Hamill, the lodge's librarian have refused to reveal the names of masons involved in the cases.