Moving forward from symbols of the past

DICTIONARIES of quotations are dangerous things. Memorable perceptions taken out of context are apt to become unexamined incantations. Almost no-one - other than philosophers and cultural historians - knows anything more about George Santayana than that he once wrote (in The Life of Reason, which was, incidentally, published exactly 100 years ago): "Those who cannot remember the past are condemned to repeat it."

It has been quoted (or misquoted) by everyone from speakers at the recent Holocaust memorial events to the Rev Jim Jones of the PeopleÆs Temple, shortly before enforcing the suicide of his membership in the Guyana jungle.

The most common misquotation is "those who forget the past", which has a very different, willed implication. Simple forgetfulness is a virtual guarantee that errors will be repeated, but humanly and forgivably. Ignoring the past or consciously setting it aside is a very different process.

The question is: was Santayana right? As he said elsewhere, "the truth is cruel" and the truth about history is that no amount of remembering seems to make much difference. We continue to neglect, abuse, make war and massacre in plain sight of our memorials and monuments, sometimes invoking them as justification. Given that they are our most visible symbols of memory, what role does our statuary have in our collective memory; what is a proper attitude to degraded emblems such as the swastika, and how can we avoid taking SantayanaÆs warning so literally that we become so obsessed with the past that we spend our lives avoiding it rather than moving forward? 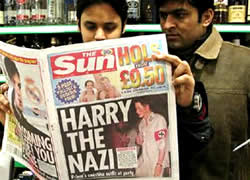 Leaving aside the predictable tastelessness of Prince HarryÆs choice of fancy dress, the episode threw up a slew of equally predictable "historical" reactions, some funny, some ironic. There was a brisk internet exchange on the subject along the lines of "The boyÆs family are German, for GodÆs sake - what do you expect?"; to the more sober point that Edward VIIÆs grave is embellished with a swastika, albeit now with an apologetic card explaining that the ancient Hindu good-luck symbol had no unfortunate political connotations when the tomb was carved.

HereÆs an other oddity, and one that countless more people walk past every day, oblivious. Just outside the National Gallery in London, there is a statue of George Washington. The irony is not that there is a memorial to an old adversary in the heart of the colonial capital. The irony is that the Founding Father is leaning on the fasces, the bundle of rods and axes that used to be a republican symbol of stern civil authority tempered with restraint but which became the emblem of Italian fascism. Serious scholars have argued that early American republicanism was fascist in the strict sense, its underlying philosophy a strange mixture of classical statecraft and Freemasonry. Even allowing that most of LondonÆs precious statuary was removed to safety during the war, how would Londoners have felt had they recognised that Washington invoked the same authority as Il Duce?

The answer again is context. The censoring instinct - which over Hindu and Buddhist protests currently calls for a European ban on the swastika in any circumstance - both invokes and neglects history. Those who would make HarryÆs party wear a civil offence are not so very different from the early iconoclasts who purged churches of unacceptable imagery, or indeed the Taleban who shelled the giant Buddhas of Afghanistan, symbols of peace and enlightenment in a polity which accepted no discontinuity between this-worldly and other-worldly virtues.

Rarely have we been confronted quite so forcefully as in this past month with questions about how we should remember the past and its dead. There was son et lumiÞre at Auschwitz at the very moment when fresh caches of nameless corpses were being bulldozed into quicklimed ground in Bandar Aceh. The obvious difference is that the Jews, gypsies, gays, trade unionists, psychiatric patients and other preterite minorities were killed by decree, while the dead of the Asian basin were victims of one of GaiaÆs more unfeeling shrugs. There has been talk about how the latter might be memorialised, largely because building memorials, however unwarlike or aggressive, is always an act of blaming. The failure of Asian governments to emulate the Pacific tsunami warning system is hardly equivalent to war guilt.

If elements of the Bush administration regard the current war in Iraq as a conflict between cross and crescent, there were evidences of both the power and the ultimate neutrality of our most cherished symbols when Red Cross and Red Crescent teams worked side by side to find the tsunami dead and protect the living from them. Those who choose to forget the past for a moment often find that the taboos and enmities it bequeaths are subject to capricious change.

How we remember the past says much about our national cultures and their hegemonies. Our most familiar memorials for the dead of the First World War is a soldier at arms rest, head bowed. Russian sculptors prefer their soldiery active, arms flared wide, shouting in triumph or defiance. In France, war memorials far more frequently feature a female figure, either Marianne or the Virgin or a generic grieving mother. And so on.

THE very idea of permanently memorialising war is new and problematic. Stand at that peculiar statue of Washington and look down Whitehall. The Cenotaph has become the focus of national mourning and yet the original construction was never intended to be permanent, was made of hardboard and only remained in place because of public feeling and public contributions. This was the story told some years ago in the Times Literary Supplement by the cultural historian Eric Homberger, ironically at the same time as the Scottish artist Ian Hamilton Finlay was a fixture on the letters pages, defending himself against the charge of using fascist symbolism in his work.

A sense of history is a wonderful thing to have and a hard thing to live by. There is a parallel in natural science. We all pretty much understand the implications of relativity - also 100 years old - but we stubbornly insist on living in a foursquare, right-angled Newtonian world. ItÆs psychologically impossible to live historically without becoming a fanatic. Even at the lowest levels of behaviour, historical consciousness is hard to maintain.

As a junior literary editor, I once approached a senior German historian to ask if he might look over a new book about the Holocaust. Without mentioning the authorÆs name, I assumed it was meretricious, but possibly difficult to ignore. "Have a look at it, and if it really isnÆt worth covering, just chuck it on the fire." There was an ominous silence. "Young man, burning books has an unfortunate connotation in my line of work."

I spent last week in Berlin, where the only wartime memorials not currently visitable are the yet-to-be-finished Holocaust Denkmal by the Brandenburg Gate and the simple, moving monument to the burning of the books on the square outside Humboldt University, currently being recobbled. Our hotel, pleasant, modern, international-bland, stood at 115/116 Kurfurstenstrasse, the wartime site of the Judenreferat, where Adolf Eichmann did the paperwork for the Final Solution. Maybe thirty metres down the street, at a discreet distance from the lobby, a display case tells the buildingÆs early history, in English, and under the heading: "NEVER FORGET". But is it really possible to remember constructively over a continental breakfast and with CNN pumping contemporary urgencies into your bedroom?

Post-1989 Berlin is a vast historical mnemonic, on its way to becoming a theme-park. We reckoned it was impossible to walk more than a quarter of a mile without some explicit reference to the war or the Holocaust. Are those who live in it or who visit it somehow being inoculated against repetition of those horrors? I really doubt it. Perhaps itÆs time now to disenchant our symbols of memory, find new ways of investing our historical understanding in the interests of progress.

Another treacherous tag-line jumps to mind. "I tell you that the past is a bucket of ashes." ThatÆs by Carl Sandburg, and youÆll presumably find it near Santayana in the dictionary of quotations.

The York Rite - 'Knights' who enjoy 'Communion' from 'Human Skulls'