Bon Appetit Magazine: Are All the Top French Chefs Freemasons?

Game of Toques: Are All the Top French Chefs Freemasons?

This is the first in an occasional series investigating the influence of Freemasons in the world of French cuisine. 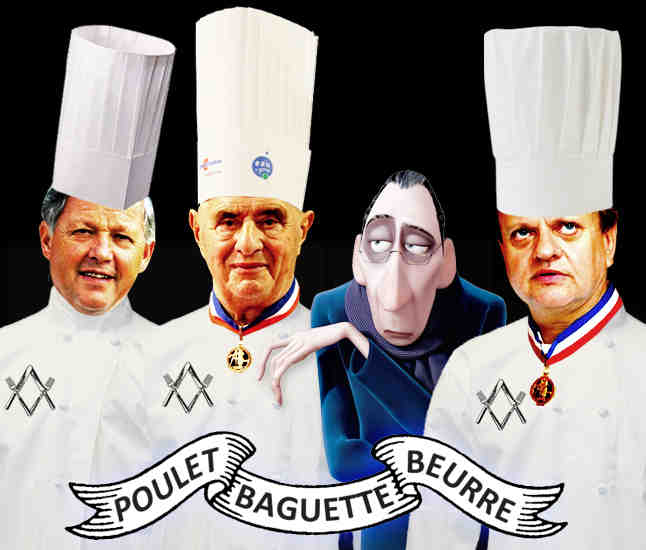 Amid the whisks, spatulas, and other specialty pastry utensils of MORA, Paris's oldest culinary supply store, founded in 1814, is a door marked "forbidden." And behind that door is the office of MORA's director, chef Christian Millet, who runs the bistro Le Pouilly Reuilly (a favorite of former President Francois Mitterrand) and is himself president of the French Chefs Association.

I have come to MORA, entered that forbidden door, and made my way past glass vitrines containing copper chocolate molds that date back to the Napoleonic era, to ask Millet--sitting behind an imposing desk--an unusual question:

"Are you a freemason?"

The question was less random than it sounds. There have long been whispers inside the French food world that all the top chefs are members of the Freemasons, and that membership can make or break careers. The gossip can, of course, be malicious.

"Of course I've heard the rumors," a young, Michelin-starred Parisian chef told me, adding that he'd heard an even younger chef running the restaurant of a five-star so-called "palace hotel" is a Freemason "and the affiliation is part of his success." 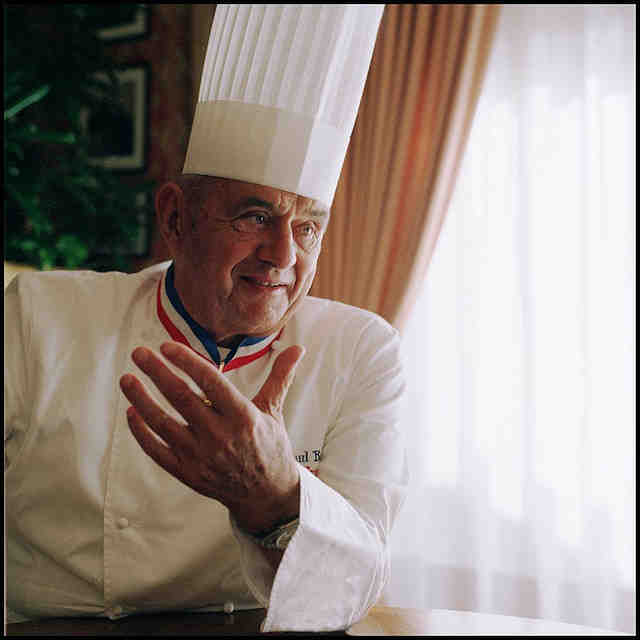 Chef Paul Bocuse may or may not be a Freemason, but either way he's got serious clout. (Credit: Flickr user alainelorza)

For those unfamiliar with "the brotherhood," the Freemasons are a semi-secret society founded in London in the 18th century, in part to promote enlightenment values. In the U.S., despite their historical influence (the dollar bill is riddled with masonic symbols), Freemasons today have about as much mystique as the Rotary Club.

As Alain Bauer, former Grand Master of the Grand Orient of France, the most important lodge in Europe, explained to me, "One-third of French fear Freemasons. One-third thank them for the creation of the Republic. One-third don't care."

Likewise, freemasonry has been intertwined with French gastronomy since early on. "Most of the 'founding cooks'"--chefs, who after the French Revolution, created French "haute cuisine"--"were freemasons," says Bauer. 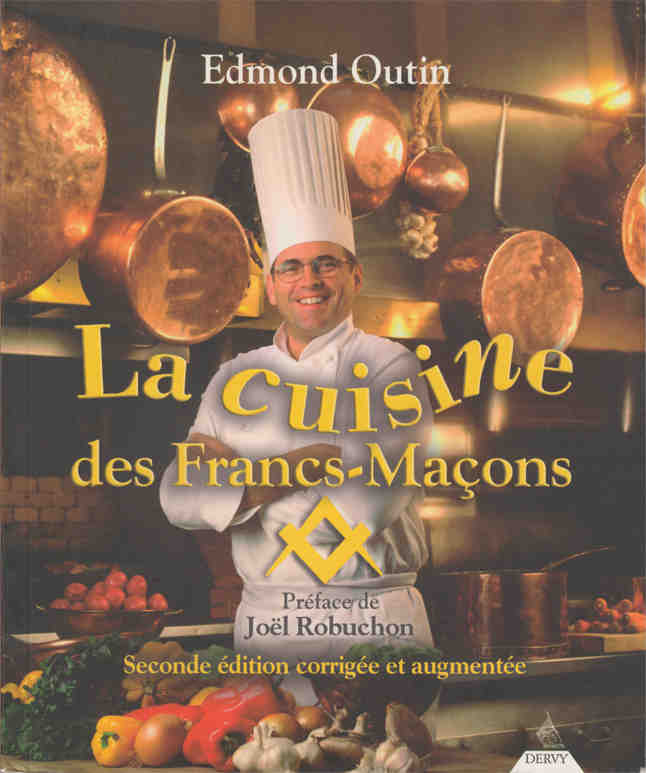 In fact, there are enough masonic chefs in France that there is a secret guide to freemason-affiliated restaurants. It's called Le G.I.T.E. (for "Groupement International de Tourisme et d'Entraide"), and it is a sort of Zagat's guide for masons, listing those establishments with a masonic affiliation (including one in New York, the now-closed Rene Pujol). Masons actually enjoy preferential treatment at these restaurants in the form of an amuse bouche or, at the very least, a personal card from the chef. (Acquiring Le G.I.T.E. can be tricky: I tried to buy it at a masonic bookstore but was turned down for lack of masonic credentials. I got mine through...other methods.)

Outside of the food world, however, the relationship between freemasonry and the big French chefs is not widely known. Only a few chefs--including Robuchon and MORA's Millet, who answered my question with "Oui, certainement!"--are public about their membership. 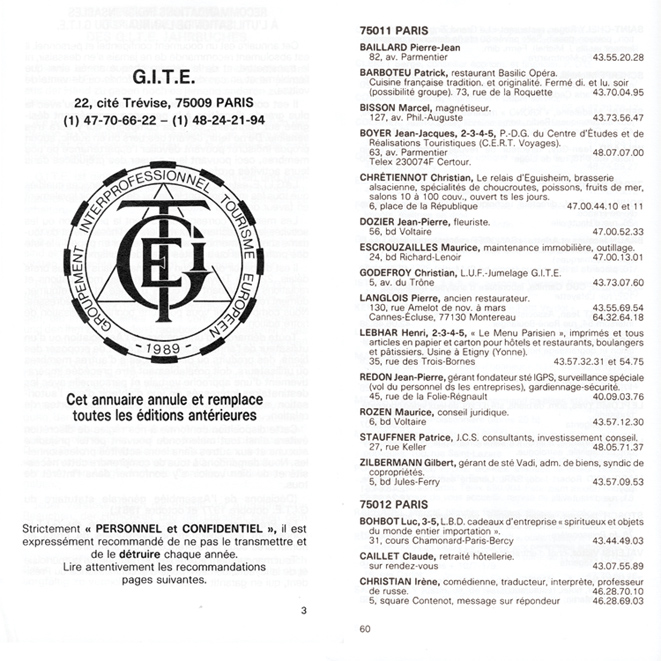 Some pages from Le G.I.T.E.

Inside, the subject and its implications are controversial. Francois Simon, the terrifying food critic for Le Figaro and the model for Anton Ego in Ratatouille, who is definitely not a freemason, hints at an actual conspiracy. In his book Freeloader: The End of French Gastronomy (unpublished in English), Simon alleges that Freemasons function as a sort of food-world Mafia, determining the careers of young chefs, "accelerating the success of some and slowing down others." Without explicitly naming Paul Bocuse as a Freemason, he writes that "without having to raise an eyebrow," the great chef could ensure that any competitor who chanced to open a restaurant near him in Lyon would find the market suddenly out of "squab" and "cream," among other essential ingredients.

This conspiratorial discussion is a bit overwrought, but it certainly seems likely there are masonic business "networks" inside the French food world, given how many chefs (and food critics) happen to be Freemasons.

I discussed these conspiracy rumors with Monsieur Millet. He dismissed them with a grave frown.

"Freemasonry is traditional in our milieu!" he said. "It is possible even the great Car├¬me"--Marie-Antoine Car├¬me, one of the greatest early 19th-century chefs--"was a freemason."

My audience with Monsieur Millet was clearly drawing to close. Freemasonry remains a sensitive topic in France, and Freemasons are a deeply secretive brotherhood. Monsieur Millet would reveal no more. Besides, it was time for his lunch.

I decided to forgo it, because my destination for dinner was Le Clou de Fourchette, a bistro near Gare St. Lazare whose specialty is wild boar stew. I had a meat-heavy meal of house pate followed by entrecote. The chef, Christian Leclou, is another member of the brotherhood, and his restaurant is one of their favorites. It's worth a visit: what made the experience memorable was the extremely warm welcome from chef Leclou, who will treat you like a mason, even if you aren't one. --David Adler

David Adler is the author of The Life and Cuisine of Elvis Presley, which was turned into the BBC/HBO documentary The Burger & the King. He is a visual artist living in New York.