Masonic Emblems on Coins and Medallions during the French Revolution

Masonic Emblems on Coins and Medallions during the French Revolution

“What was the influence of Freemasonry on the French Revolution? The clerical world has always maintained that the latter was the result of a conspiracy of the lodges; the Masonic world has always fought against this thesis. For political reasons, some Masonic authors have denied any, or mostly any, influence their society may have had on revolutionary events, [while] others – concerned with historical truth – have shown the important role played by the lodges, and particularly by their members, on the progress of the Revolution. […] To symbolize its principles and ideals, the Revolution drew upon two sources: the symbols and trappings of classical antiquity, and the rituals of Freemasonry. In the first category belong the goddesses of Liberty, Hercules, the Phrygian caps, fasces, clubs, vanquished hydras, etc.; the second borrowed the square, compass, level, trowel, the triangle with and without a radiant eye, the sun, moon, intertwined hands, knotted tassels, the mirror, the pelican, the eagle bearing its young, the beehive, circumference, etc.” (Karmin, pp. 3, 10) 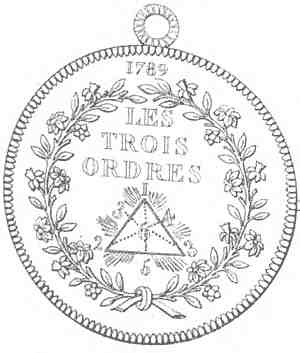 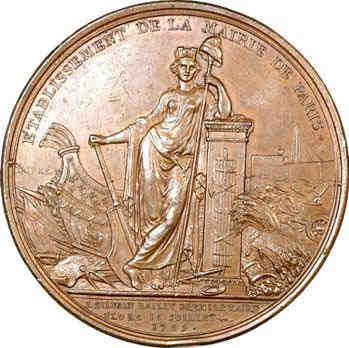 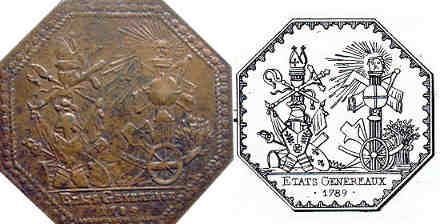 N 42. Estates General; Otto: “Henning did not notice the Masonic inspiration of this piece; in fact you not only see the square and compass but the [Masonic ‘Jachin and Boaz’] ‘two column’ [motif] surmounted by the sun and moon. It is true that the latter is very skillfully represented by a bishop's miter, placed somewhat obliquely.” (p. 11)