'Open Sesame': A look at the Scottish Rites' House of the Temple

Conspiracy buffs tour the lavish Washington, D.C. temple of the Freemasons, one of the world's most mysterious fraternities

By David A. Taylor 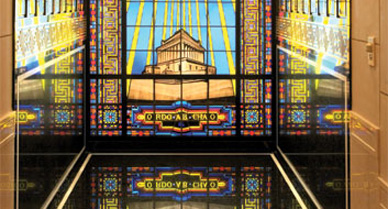 Mammoth sphinxes guard the House of the Temple of the Scottish Rite, a formidable neo-Classical building in the heart of Washington, D.C. Inside, Egyptian hieroglyphics adorn a soaring atrium. The building's nine-foot-thick walls hold human remains. Bronze coiling snakes flank a large wooden throne, canopied in purple velvet, in a second-floor inner sanctum called the Temple Room, where men from around the world gather behind closed doors every two years. Over the centuries the select membership has included signers of the Declaration of Independence; George Washington, Theodore Roosevelt, Gerald Ford and 13 other presidents; Senators Charles Schumer and Robert Dole; Chief Justice Earl Warren and other Supreme Court justices. Formally they are known as Freemasons, but most people know them simply as Masons. And this artfully forbidding edifice, a mile from the White House, is their southern headquarters.

Long viewed by outsiders as a mysterious society and one of the world's most powerful fraternities, Masons have recently become the object of even more curiosity as filmmakers and novelists mine Masonic legends and symbols for the stuff of conspiracy. In the 2004 thriller National Treasure, Nicolas Cage followed Masonic clues and invisible writing on the Declaration of Independence in search of a hidden cache of gold. Dan Brown, author of The Da Vinci Code, has said his next novel would involve Masonic architecture in Washington, D.C. His Web site challenges readers to find Masonic clues on the dust jacket of The Da Vinci Code. Perhaps because of such intrigue, the number of visitors to the temple has tripled over the past two years to 12,000.

Which shows that Masons have nothing to hide, says retired Maj. Gen. Armen Garabedian, a Mason for 49 years. "This secret thing stems from way back," he says. "If we were a secret organization, tours would not be offered." The temple has always been open to the public.

Masons, who number 1.3 million in the United States (down from the 1959 peak of 4 million), maintain that their organization is dedicated to philanthropy. The organization donates more than two million dollars a day to healthcare, education and other causes, according to its spokesperson. Still, even Masons acknowledge that the group's origins are murky, though the fraternity probably emerged from a 15th-century medieval guild of master cathedral builders in Europe and evolved into an elite gentlemen's club. Freemasonry arrived in the United States in the early 18th century. Originally an all-male, white organization, today's Masons are ethnically diverse and some chapters include women.

By the early 1800s, actual tools of masonry, such as the compass and surveyor's square, had come to symbolize building one's own spiritual temple through virtue and discipline. The House of the Temple abounds in

ancient, if not always interpretable, symbols, from the 17-ton sphinxes flanking the entrance to nine-point stars, two-headed eagles and images of the Greek god Hermes. A stained-glass window bears the ancient Egyptian "all-seeing eye," which, theorists of Freemason conspiracies like to note, also appears on the Great Seal of the United States, designed in 1782, and the dollar bill, which acquired the ocular icon in 1935, thanks to FDR, a Mason.

Completed in 1915, the House of the Temple was designed by James Russell Pope, architect of other notable Washington buildings, including the National Gallery of Art (1941) and the Jefferson Memorial (1943). "The temple launched Pope's career in Washington," says Paul Dolinsky, head of the Historic American Buildings Survey. "It became one of the most respected classical designs in the world at the time." Dolinsky says the Temple Room's gilded serpents and velvet drapings remind him of the set of the 1934 epic Cleopatra. "Cecil B. DeMille meets Freemasonry," he says. "It's really a larger-than-life Hollywood set."

Modeled on a Greek-style temple, the building contains no metal girders—just stone, as the ancients would have constructed it. The massive limestone facade is ringed with 33 Ionic columns. The number 33 proliferates in Masonic ritual, but the group's historians say they don't know what it symbolized originally. The dark green marble floors of the atrium lead to a grand staircase and a bust of Scottish Rite leader Albert Pike, a former Confederate general who spent 32 years developing Masonic rituals. Pike remains a controversial figure, with detractors alleging that he was a member of the Ku Klux Klan and a Satanist. In 1944 the Masons, by an act of Congress, gained permission to dig up Pike's remains from a local cemetery and bury them in the temple.

Among the artifacts on display is a Masonic membership certificate signed by Paul Revere. The silversmith reportedly recruited some brethren for the Boston Tea Party, in 1773. A large painting of George Washington laying the cornerstone for the Capitol and wearing a Masonic apron hangs in the banquet hall. Scores of portraits line a curving mahogany corridor in a sort of I-didn't-know-he-was-a-Mason gallery: Sam Ervin, John Glenn, Harry Truman, Arnold Palmer, John Wayne and Will Rogers among them. On the first floor is the reconstructed office of FBI director and Mason J. Edgar Hoover.

With its roster of power brokers, Masons have long been accused of political chicanery and undue influence, says Lynn Dumenil, history professor at Occidental College and author of Freemasonry and American Culture, 1880-1930. "Today, it's all pomp and circumstance. There are no deep dark secrets in the Scottish Rite building."

Yet visitors to the Washington temple pepper tour guides with skeptical questions. Were Masons involved in the Salem witch trials? Is there a secret tunnel connecting the building to the White House? During one recent tour, a guide pressed on a smudged spot on a stone wall just outside the sumptuous Temple Room. The wall gave way, revealing a spiral stairway that snaked up into darkness. A few visitors cautiously stepped forward. Surely, this is a secret passageway to some treasure! Indeed, the stairs lead to the loft for the great pipe organ.

David A. Taylor is a freelance writer and author of Ginseng, the Divine Root.

I want to know why sphinxes were chose to guard temples. I don't have an e-mail so can you just post it on your site?