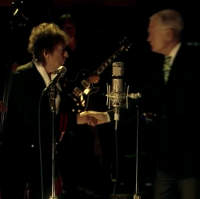 Bob Dylan Performs ‘The Night We Called It a Day’ on ‘Letterman’: Watch

Dylan sang "The Night We Called It a Day."

Bob Dylan doesn’t perform much on late-night television. But when he does, he makes it memorable.

On Tuesday night (May 19), Dylan did just that when he appeared as the musical guest on The Late Show with David Letterman. It was Letterman’s next-to-last show ever.

Related: Musical Legacy of David Letterman and The Late Show

Dressed in a black suit with red trim, a white shirt and a black string tie, Dylan sang “The Night We Called It a Day,” a jazz standard from the 1940s that appeared on Dylan’s recent album, the Frank Sinatra tribute Shadows in the Night. Dylan’s voice took the lead against a smoky, late-night arrangement that stayed true to the studio version.

“Beautiful,” Letterman said, stepping up to greet Dylan once the song finished. “Thank you, Bob.” He turned then to the band, obviously impressed with the superbly low-key performance, noting, “all brushes.”

Dylan first performed for Letterman in 1984 (during the NBC incarnation of his show). He returned in 1992 and then again in 1993, the year Letterman moved his show to CBS.

David Letterman’s final episode as host of The Late Show airs tonight (May 20) at 11:35 ET on CBS.