Mysterious deaths, the Marquess and the forbidden treasure 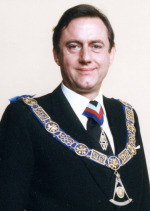 You've seen National Treasure, the fictional movie that says the Freemasons collected vast treasures to protect them for the people of the world.

There's a real-life version of National Treasure playing out in London, with side stories from China, Italy and Hungary. Even Croatia and Lebanon get bit parts in this power play. Only in this story, the Freemason is looking out not for the people of the world, but apparently for himself.

And at the center of the story is the Marquess of Northampton, Spencer "Spenny" Douglas David Compton. The Marquess is said to be the world's richest Buddhist. He is now married to his fifth wife, having sired semi-royal children with three of his wives.

The Marquess collects treasure ù in this case the 2500-year-old Sevso Hoard. It comprises 14 or more items of silver and represents probably the most important collection of Roman silver ever found. It's also stolen property, and no musuem in the world will touch it. Until now.

The Hoard was originally discovered in 1978 by Jozsef Sumegh, a 22-year-old Hungarian, who hit a copper vessel containing the silver pieces with his shovel while doing excavation. Sumegh sold a few pieces on the black market, and soon found himself dead, swinging from a rope in an unused wine cellar. Two of his close friends were murdered, too.

Hungary, Lebanon and Croatia have all sued unsuccessfully for return of their "national treasure."

Through unnamed sources, the Marquess eventually paid nearly ú14 million for the silver pieces. Saying he got bad legal advice over buying the silver ù it's both priceless and worthless, as no one will buy it ù he sued his lawyers, and received a ú24 million out of court settlement.

That's one shrewd Buddhist Freemason. What is the sound of one hand counting money?

Mysterious deaths, the Marquess and the forbidden treasure

AN EXTRAORDINARY event is under way in London. The auction house Bonhams is exhibiting to invited viewers one of the world's most astonishing but rarely seen art treasures: the 2500-year-old Sevso Hoard. It comprises 14 items of silver and represents probably the most important collection of Roman silver ever found. What also makes the event extraordinary is that the Hoard most probably was stolen.

Many are interested in the fate of the Hoard. China has asked the US State Department to place an embargo on the importation of all artefacts and artworks made in China before 1911. What is unusual about the Chinese request is its extremely broad scope. US-based art dealers and auction houses are aghast that their Government might agree to this request or some version of it as part of a wider trade deal. The US has just decided to delay its decision until early next year, but rarely does it reject such requests in their entirety.

Another with an interest in the matter is Marion True, a former curator at the Getty Museum in Los Angeles. She's on trial in Italy for conspiring to receive illegally excavated antiquities. The museum's new director, Michael Brand, an Australian who used to be a curator at the Australian National Gallery in Canberra, recently announced that the Getty will be returning two disputed objects to Greece.

It is becoming increasingly difficult to freely trade antiques and antiquities around the world, which partly explains the boom in contemporary art.

Bonhams claims that it doesn't actually intend to sell the Sevso silver, but that does raise the question of what it is doing with it. No doubt Bonhams' obfuscation is an attempt to head off legal action. The Hungarian Government claims that the silver was illegally exported from Hungary. It has already sent a letter of protest to Bonhams. When and from where the hoard came is very important particularly to its current owner, the Marquess of Northampton. If it were free of such provenance problems, it could fetch $A250 million.

The Marquess is one of England's richest men. Other than inheriting things, his main function is to serve as the Freemasons' pro-grand master, a role that deputises for the grand master, a position now held by the Queen's cousin, the Duke of Kent.

The Marquess bought the silver not for aesthetics but to get even richer, a plan that has gone spectacularly awry.

Most experts agree that the Sevso silver almost certainly was illegally removed from Hungary. Proving otherwise has not been possible and so no major museum in the world will touch it. They won't even borrow it. Curators at the British Museum and other public galleries reacted with incredulity when they received their glossy Bonhams invitations to see it.

The Hoard seems to have been unearthed in 1978 by Jozsef Sumegh, a 22-year-old Hungarian. Sumegh was carrying out excavation work in Hungary when his shovel hit what turned out to be a large copper. It was stuffed with at least 14 silver objects, possibly as many as 30, including plates, ewers (jugs) and an amphora (two-handled Roman vessel).

Sumegh sold perhaps three pieces but kept the rest. He thought that if he sold it as a group, he could get more money. One piece found its way to London in November 1980 and was sold to a consortium called the Art Consultancy. The Marquess was the consortium's principal backer.

Little by little, other pieces were offered to and bought by the consortium and later directly by the Marquess. Overall, he paid about ú14 million for his 14 pieces. The buyers had no idea of the silver's true source. It was certainly no longer Jozsef Sumegh. He was by then dead, probably murdered; his body found hanging by its neck in a disused wine cellar. Within months, two of his friends would be dead too, also in suspicious circumstances.

The auctioneers Sotheby's intended to sell the 14 pieces in February 1990. The Marquess had been advised that he could expect to triple his investment. But doubts were raised about the Hoard's source and Sothebys felt obliged to withdraw it from auction. Hungary, Lebanon and Yugoslavia/Croatia each claimed ownership and unsuccessfully sued the Marquess for its return.

The Marquess, it seemed, had become the target of an elaborate smuggling operation. But how he could have spent so much on items of such uncertain provenance is unclear. Obviously, he'd received appalling legal advice. He sued Allen & Overy, the law firm that advised him, and is rumoured to have received an out-of-court settlement worth ú24 million.

The Marquess was left with silver that bizarrely was both priceless and worthless. So, for the past 16 years, he has stored it in crates in a vault on one of the Channel Islands, unable to sell it or even publicly display it.

Will the Sevso Hoard find a buyer? Ordinarily, the obvious buyer would be a museum but museums everywhere are under pressure to disclose the source of their treasures and when they obtained them.

It's a far cry from the 1920s when a young Andre Malraux was caught smuggling an Angkor period sculpture out of Cambodia. He was later appointed France's first minister for culture. How times have changed.