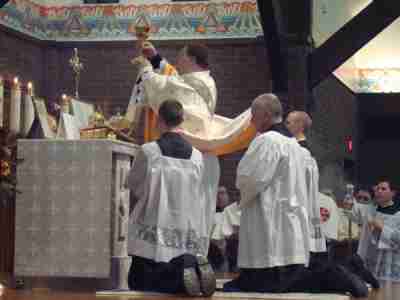 Cantian Father Scott Haynes raises the chalice during the eucharistic prayer of the Tridentine Mass held Nov. 21 at Holy Trinity Parish in Westmont.

WESTMONT—Bundling themselves against the sleeting rain and snow, people of all ages traveled Nov. 21 to Holy Trinity Parish in Westmont to experience something old made new again—a Latin Mass.

As golden votive candles flickered and the sound of Gregorian chant fell upon their ears, the congregation watched Cantian Father Scott Haynes kneel for several minutes at the foot of the elaborately prepared altar. Together with altar server Rick Randick, a Holy Trinity parishioner, they quietly recited the 41st Psalm and the Confiteor to begin the Tridentine Mass.

Bob Mackanin, a parishioner at Holy Trinity, said he served as an altar boy at the Latin Mass while growing up. “I’m just so happy we had a chance to do this,” he told the Catholic Explorer.

Father William De Salvo, the pastor at Holy Trinity, said people have been asking for a Latin Mass since his arrival in 2002. He decided to invite the priests and brothers of the Canons Regular of St. John Cantius in Chicago to celebrate the Mass as a conclusion to the parish’s Forty Hours devotion honoring the Eucharist. He invited them “because they are known throughout the Chicago area for their love, care and competence in celebrating the traditional Mass,” he said in an e-mail to the Explorer.

Father De Salvo serves the Diocese of Joliet as dean of the Eastern DuPage Deanery. He estimated about 800 people attended the Mass, and many reacted positively. “An overwhelming amount of people asked that the celebration of the Tridentine Mass continue,” he said.

Holy Trinity parishioner Janet Mackanin enjoyed the prayerful silence of the Mass and the way the priest and servers acted. “It seems that they are also more involved with the Mass and praying for themselves and God, and not concentrating on the congregation,” she said to the Explorer.

In July Pope Benedict XVI relaxed restrictions on the Tridentine Mass, making it more available to interested Catholics. However, the rite does not replace the current ordinary liturgy instituted by Pope Paul VI in 1969. Pope Benedict describes the Latin rite as “extraordinary.”

In his homily, Father Haynes said the restoration of the Latin Mass is part of the church’s new evangelization.

Father De Salvo explained, “The Holy Father wishes to preserve the immense spiritual, cultural and aesthetic treasures linked to the ancient liturgy. The retrieval of this wealth is linked to the no less precious one of the current liturgy of the church.”

“The ritual of the Mass, and the prayers of the Mass are very rich, and as you study them, they really do assist you in penetrating, at a deeper level, the sacred mysteries (of the Mass),” Father Haynes explained to the Explorer.

There are distinct differences between the Latin Mass and the ordinary liturgy. The altar is turned around and, during the eucharistic prayer, the priest keeps his back to the congregation. The celebrant says the Latin prayers mostly to himself. Also, during distribution of Communion, people may not touch the host. They must receive it on their tongues, while kneeling.

Holy Trinity parishioner Lillian Halla grew up with the Latin Mass. She told the Explorer, “I think the services this evening were simply beautiful. It’s just … like the old time.”