Freemasons Afraid of Being 'YouTubed' 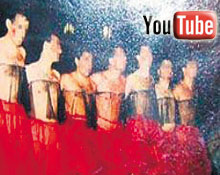 Freemasons, who have maintained their tradition of secrecy for centuries, are in the middle of an interesting dilemma.

The organization, which has established a live broadcast system among the Masonic lodges, is now afraid of being watched by others.

Esra Anil, a Turkish woman, submitted her mason husband’s photos to a court during their divorce trial.

Holding teleconferenced meetings with lodges in different cities raised concerns of being hacked.

Tesviye, the journal of the Grand Lodge for Turkey’s Free and Accepted Masons, handled the topic in its latest issue.

The magazine, which is distributed to masons, only announced the ceremony teleconferenced by four lodges in Ankara, Istanbul and Izmir with the title “Masonry and Developing Information Technology.”

The method, used for the first time by the organization, was announced as good news to the brothers but a special section covered the fear of the images being hacked.

Hakki Buyukcivitcioglu from the Ucnur Lodge handled this issue in his article and emphasized the technology was not safe.

“Our activities may one day be broadcasted on a TV channel or an Internet site because there will be no ‘irregular’ knockings on the door this time. We will not even feel that we are being watched by others. We should be considering taking measures to avoid being hacked,” journalist Buyukcivitcioglu warned.

Buyukcivitcioglu, himself a media member, called for measures to alleviate these concerns.

“This online system has been tested but no instruction to make it widely used has come yet. I think it will be more widespread in the oncoming months,” an anonymous lodge chairman said.

It is stated the teleconferencing system will help in communicating in-service training conferences, seminars and educational workshops to lodges in other cities, but it is warned this will not be limited with these only and some “confidential” works will also be communicated to brothers in other cities.

Stating this kind of infiltration may be quite dangerous, the lodge chairman said, “A possible leak would be no good. There are certainly such concerns and it is stated measures necessary will be taken.”

Confidentiality is one of the basic elements of the Masons. Their organization is structured on a scheme of 33 degrees and different secrets are given at each stage.

These secrets are taught to the mason brothers in the ceremony of promoting.

Each mason swears loyalty to the secrets he is given.

As the secrets become more important in every degree, the punishment gradually increases in case of disloyalty.

Those who belong to higher degrees (higher than three) agree to have their skull broken into pieces.

Masonry Secrets Broadcast in the Past

A secret recording of ceremonies in Masonic temples were first broadcast on Turkey’s Channel 7 in 1997.

A Satanic ritual, only allowed for the 33rd-degree masons, was displayed in the candid camera images.

Masons dressed in white and carrying swords were pouring goat’s blood in bowls in front of Magen David in the temple.

The goat’s head was being burnt on a stick and the great master holding the ritual was drinking the goat’s blood and praying in Hebrew.

A ceremony displaying two people’s acceptance to the masonry was displayed in other images.