Grant County has several chapters of the organization 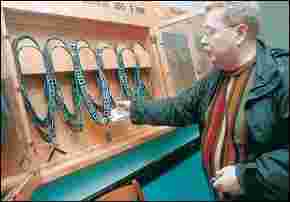 LODGE SYMBOLS - Bill Henry, a member of the Masonic Lodge, explains the symbols on the jewels worn by officers during the services. The officers also wear special aprons with the same symbols. The release of the movie National Treasure returned the spotlight to the Freemasons, a centuries-old organization with several chapters in Grant County. 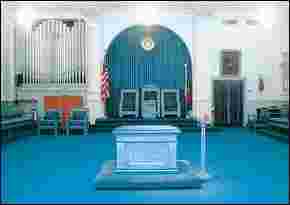 LODGE INTERIOR - Above is the Lodge room or Blue room of the Masonic Temple, 418 S. Boots St. The "G" in the Masons' symbol stands for geometry. In the photo below, the original charter from 1850 hangs inside the room. When a member passes away, the cloth is draped over the document. 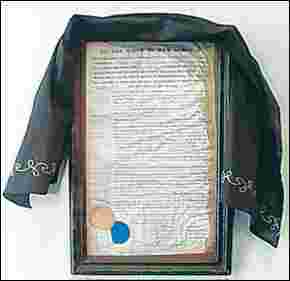 Think of the movie, National Treasure, as a quick course in Freemasonry - part fiction, part fact, all Hollywood.

John Roush, a member of Marion's McCulloch Lodge of the Masonic Temple, saw the movie already, but plans to go back.

"There's just tremendous symbolism in that movie," said Roush, Marion, who has been a Freemason for almost 40 years. I know a lot of it is legend, but it's just fascinating."

Roush and some other Freemasons around the world think the movie could stir fresh interest in the centuries-old fraternity, long a target of conspiracy theorists.

In the movie, now playing at local theaters, Nicolas Cage's character learns about a legendary treasure protected by the Freemasons, the location of which is hidden in a map etched on the back of the Declaration of Independence. The movie perpetuates both good and bad stereotypes about the group, including the notion that it has been involved in a centuries-old plot to run the country.

"Freemasonry is a philosophy of life," said former Marion Mayor Bill Henry, who has been a member of Marion's Samaritan Lodge since he was 21 and whose forbearers have been members for more than a century. "It's a discipline of life based on the building trades. It's not a religion. You've got a lot of people that think it's a religion. It's not a secret society."

Conspiracy theorists often cite circumstantial evidence to support their belief that Freemasons secretly wield great power and influence. According to Freemason Web sites, nine of the Founding Fathers who signed the Declaration of Independence were members, as were 14 U.S. presidents, eight vice presidents and at least 35 Supreme Court justices.

In Gas City, the Freemason membership list reads like a veritable who's who in local government. Mayor Larry Leach is a member, as is City Councilman Larry Terwillegar.

"Actually, quite a few of our city officials are Masons," said Terwillegar, who serves as secretary of the Gas City lodge. "There has not been a mayor of Gas City since 1942 that wasn't a Mason."

Historically, members have shunned publicity. Meetings are for members only and they use symbols and rituals that members vow not to reveal.

But not everything about Masons is kept secret.

"We wear rings and pins," said Pete McPherson, a member of the Jonesboro Masonic Lodge. "You can tell whether someone is a Freemason or not if they're wearing a pin. If you look on their car, there's a license plate that said 'MM.' It stands for 'Master Mason.' There are many of those around. It's a fraternity. That's all Masonry is. A fraternity of men. You have the Eagles. You have the Masons."

Membership in the fraternity has been declining. Organization data shows that U.S. membership peaked in 1959 at 4.1 million. The number has dropped to about 1.6 million this year.

In Grant County, trends have been similar, some organization members said. Marion's Samaritan Lodge has about 250 members, Henry said. McCulloch Lodge, which also meets in the Masonic Temple downtown, has about 170 members, Roush said.

Recently, some lodges in New York and elsewhere are taking steps to attract younger members through recruitment drives. No formal drive is taking place in Grant County, but rules have been relaxed in the last few years to try to encourage younger members to join. The eligible age has been lowered from 21 to 18, for example, and potential members can ask a Freemason for information about how to join.

One rule remains unchanged: All members must believe in one Supreme Being, the Grand Architect of the Universe."

"I enjoy the fellowship and the spirit of the brotherhood," said Roush, adding that the group also participates in projects for charity. "When we give, we give silently. That's the way we are."