Body of 'God's banker' to be exhumed 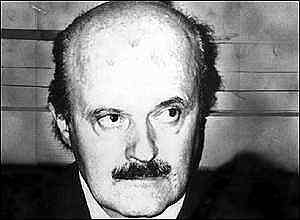 The body of powerful Italian banker Roberto Calvi is to be exhumed next month to determine if he was murdered or committed suicide.

There have always been unanswered questions about the mysterious death of Roberto Calvi who was found hanged under a bridge in central London in 1982.

Under his chairmanship, Italy's largest private bank, Banco Ambrosiano, laundered money for the Mafia. When it collapsed with huge debts, the scandal spread all the way to the Vatican.

Mr Calvi had had close links with the Vatican's own bank, the Institute for Religious Affairs, earning him the nickname "God's banker". He was also connected to the shadowy masonic organisation, P-2.

Ever since Mr Calvi was found hanging under Blackfriars Bridge in London with his pockets stuffed with bricks his family have suspected Mafia involvement.

Now, his remains are to be exhumed on 16 December from a cemetery in the northern city of Milan.

An autopsy will be carried out to see if he really did die by his own hand.

The examination has been requested by one of four men accused of Mr Calvi's murder. Among the four is leading Mafia boss Pippo Calo, already behind bars on other charges.

He is allegedly the former treasurer of the Sicilian mafia, the Cosa Nostra.

A leading Mafia informer has said that Mr Calvi was murdered because he was given Mafia money to recycle and made a poor job of it.

None of the four accused has yet gone on trial